GuitarScale.org present scales by pictures and supplementary information. You can choose between scales for guitar and bass guitar.

The scales are presented on diagrams with graphical fingerboard representation and — if nothing else is mentioned — based on standard tuning. 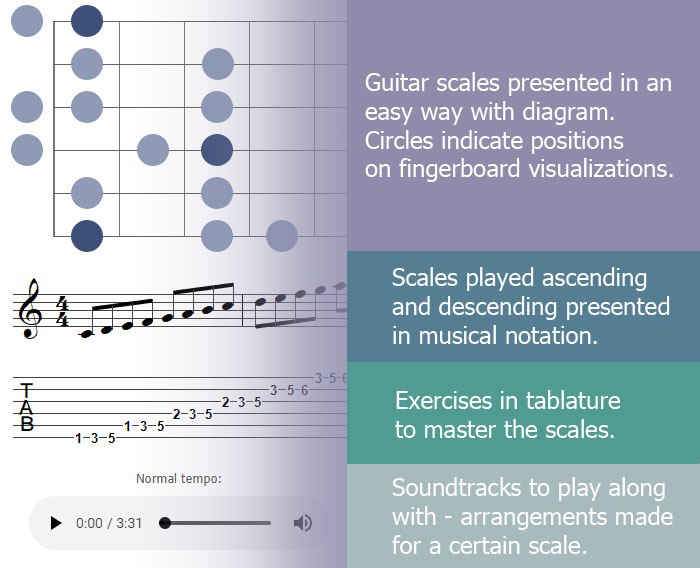 Scales presented in an easy way

This site has set a goal to present scales in a way all players including beginners can understand. To enhance the learning, scales are presented with various diagram styles:

The goal is also to deliver additional information so that ambitious musicians can study scales and understand them on a deeper level. By clicking on the collapsible panels on the scales’ presentation pages, more information is available including scale degrees, related chords and theoretical explanation.

What is a scale?

A scale in music is constructed from a series of tones. The amount varies, major and minor scales, for example, contains seven tones of twelve possible semi-tones. Such series of tones will sound great played together and are often used as foundation for composing or improvisation. They can be played in any order – playing them root to root is only when practicing.

A distinction can be made between rhythm and lead guitar. In a rock band with two guitarists, one could play the rhythmic parts whereas the other guitarist plays the solo parts. A guitar solo is often based upon one or several scales. In blues and jazz, improvisation is a common element. Improvisations are often played “over” chords and based on scales that match the chords.

Why should you learn them?

So, why bother at all with these collections of tones that has a lot of strange names? There is actually a great idea to invest time with scales and here are some of the reasons:

These are some of the reasons that makes scales the most fundamental knowledge alongside chords for guitarists.

How to play a scale?

First of all when you learn a new scale, it is recommended to play it from start to end a couple of times, just to get it under your fingers. The animated diagram below shows how the scale in A major can be played ascending and descending over one octave. This is just one of many patterns for that specific scale, but it is a good starting point for training.

When you practice on scales, it is important to use adequate fingerings. If three notes are included on one string, you should use three fingers and to avoid moving your hand to much you should also include the little finger when it makes the run over the fretboard more efficient.

The first step is to study diagrams, such presented on this site, and practice them (perhaps in conjunction with tabs or notes). Scales are often learned in parts of one or two octaves. The final goal, however, is to be able to play the scale over the whole fingerboard. The latter will be possible after the guitarist has been familiar with the scale and learnt it in different positions.

The hard part is to memorize scales. Being able to visualize different scales all over the fretboard is not achieved in a short time. A tip is to take a shortcut by learning the intervals. Here are the intervals for the Dorian scale: 2 - 1 - 2 - 2 - 2 - 1 - 2. This means that whenever you start on a root note, you can go two steps up or down the fretboard on the same string. After that you can go another one step up or down. And after that, go can go two steps up or down three times in a row — still all on the same string. When, you can go one step in either direction and finally two steps in either direction to return to the root note. By this method you can move all over the fretboard with speed just minutes after you know the intervals of the scale! You should also notice that scales, in general, are movable. Meaning that the same shape of notes can be moved up and down on the fingerboard. The C major will become C# major and fret up and so on.

In relationship to scales, modes can be seen as modifications of a scale. Modes use the same notes, but the order is reorganized. Despite the fact that exactly the same notes are involved, the modes sound different. Why? This is because of the alternative order of the intervals. Although they partly overlap, the overall interval pattern changes and that results in a different character of sound. The most common modes in music are Ionian, Dorian, Phrygian, Lydian, Mixolydian, Aeolian and Locrian. These goes back to the Ancient Greece and are still used in music today (dependent of the music genre, some of them will be more relevant than others when it comes to lead guitar playing).

If you have any concern or have suggestions concerning the subject treated on this site, feel welcome to contact us by mail, contact@guitarscale.org.